To Celebrate The 80th Birthday Of The Living Legend 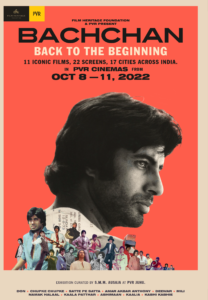 To mark the momentous occasion of the 80th birthday of the legendary actor Amitabh Bachchan, Film Heritage Foundation announces a unique film festival titled ‘Bachchan Back To The Beginning’ in partnership with PVR Cinemas.

Slated to be one of the grandest film festivals that celebrates an icon through his landmark early films, the four-day celebrations will be conducted from the 8th – 11th October 2022 in 17 cities, covering 172 showcases and 30 screens across 22 cinema halls all over India.

The not-for-profit organization founded by filmmaker and archivist Shivendra Singh Dungarpur has meticulously curated a bespoke collection of eleven blockbuster films that gave birth to one of the biggest superstars of the nation who continues to shine as brightly over 50 years since his debut on the silver screen. Audiences across cities such as Mumbai, Delhi, Kolkata, Bengaluru and Hyderabad to Ahmedabad, Surat, Baroda, Raipur, Kanpur, Kolhapur, Prayagraj and Indore will get the exceptional opportunity to witness the sheer magnetism of the superstar on the big screen through his landmark films such as Don, Kaala Patthar, Kaalia, Kabhie Kabhie, Amar Akbar Anthony, Namak Halaal, Abhimaan, Deewar, Mili, Satte Pe Satta and Chupke Chupke.

As a special incentive to his fans who want to enjoy all the films, PVR has made available a Movie Pass @ INR 400 that can be purchased online through the PVR App and Web. The pass can be redeemed across all days in any of the 22 cinemas where the movies are running. Single Movie tickets would be priced @ INR 80. For further information, please visit the PVR Website, www.pvrcinemas.com or download the PVR Mobile App. Bookings open on Saturday.

Shivendra Singh Dungarpur, Director, Film Heritage Foundation states, ”Growing up, I was the biggest Amitabh Bachchan fan. I used to break bounds when I was in school to watch his films and was often thrown out of class in college for sitting in the back benches and writing notes about his films. I am so glad that Film Heritage Foundation is paying tribute to Mr. Bachchan on his 80th birthday with the first-of-its-kind country-wide four-day festival. It has been a mammoth task putting together the best of his early films that launched him as a superstar and to showcase these films so that audiences across the country can enjoy the films the way they were originally screened – on the big screen. I know that this will be the first of many festivals that will bring our cinematic heritage back to the theatres where it belongs.

I’d like to thank Ajay Bijli and the team at PVR for coming on board and making it possible to screen these iconic films in 17 centres around India from megacities like Mumbai and Delhi to smaller towns like Kolhapur, Surat, Kanpur and Indore. I would also like to thank my friend Siddharth Roy Kapur for his generous support that enabled us to do the festival and mount the exhibition of Mr. Bachchan’s memorabilia at PVR Juhu.”

Mr. Ajay Bijli, Chairman & Managing Director, PVR Ltd, said, “PVR is delighted to partner with Film Heritage Foundation for ‘Bachchan Back to the Beginning’ to mark the 80th birthday of Mr. Amitabh Bachchan. We are so happy that for the first time ever we are able to stage a festival of this kind of Mr. Bachchan’s films across the country to celebrate his work at the scale that is befitting the biggest icon of Indian cinema. The 4-day festival presents an incredible opportunity for fans across India, in big cities and small towns, to watch Mr. Bachchan in his most memorable roles, not on phones or laptops, but larger than life on the big screen, We look forward to working with Film Heritage Foundation in the future to regularly showcase the best of India’s film heritage in our cinemas.”

To coincide with the film festival, Film Heritage Foundation that is dedicated to the preservation, restoration, documentation and exhibition of India’s film heritage will also set up an exhibition of rare Amitabh Bachchan memorabilia at PVR Juhu in Mumbai.

The narrative of the exhibition will be told through arresting framed visuals, celebrating decades of success, fandom and accolades. This one-of-its-kind exhibition of Amitabh Bachchan’s career will entail a diverse and carefully curated collection of memorabilia, including rare vintage posters, commissioned artworks, photographs, LP jackets, magazine covers, a giant 7 feet standee and the original Shahenshah costume.  Meticulously researched to delight the visitors with rare and unseen shooting stills from the superstar’s career, the exhibition is being curated by film historian, author and archivist S M M Ausaja.

In 2021, Film Heritage Foundation was instrumental in getting Amitabh Bachchan honoured with the prestigious International Federation of Film Archives (FIAF) Award at the hands of iconic filmmakers Martin Scorsese and Christopher Nolan

How to Make the Most of Mindful Parenting

How to Make the Most of Mindful Parenting

Alia Bhatt weighs in on north vs south debate: ‘The lens today is hard on cinema in general’