India’s Union Minister Dr Jitendra Singh interacts with CEOs and representatives of more than 30 prominent American companies in Washington; The Minister asks them to avail of enabling business and investment milieu created in India by PM Narendra Modi

Union Minister of State (Independent Charge) Ministry of Science and Technology; Minister of State (Independent Charge) Ministry of Earth Science; MoS PMO, Ministry of Personnel, Public Grievances, Pensions, Space and Atomic Energy, Dr Jitendra Singh today interacted with CEOs and representatives of more than 30 prominent American companies at the US Chamber of Commerce headquarters in Washington and exhorted them to avail of enabling business milieu created in India by Prime Minister Narendra Modi. 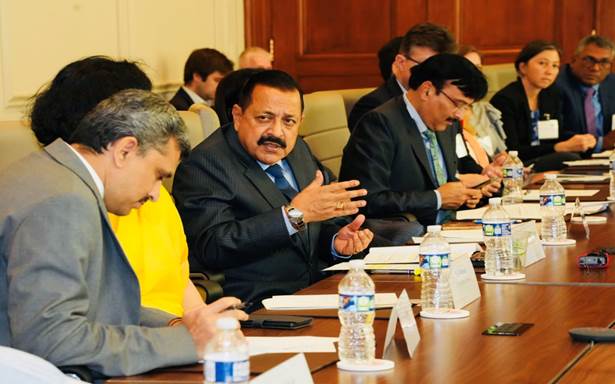 Invivo Air is ready for take-off!

The Minister said, India under Modi is incentivising investments and called upon them to also engage in Joint Venture opportunities in the wake of pro-business reforms carried out by the Government over the last 8 years.

Earlier, Dr Jitendra Singh as the head of Joint Ministerial Indian delegation, arrived at New York last evening and proceeded to Washington on the first leg of the 5-day US visit, which includes participation in Global Clean Energy Action Forum scheduled from 21st to 23rd September at Pittsburgh, Pennsylvania. He is also scheduled to interact with eminent academicians as well as Indian diaspora. 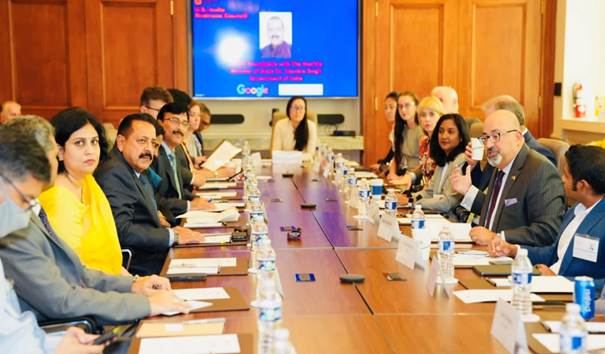 Dr Jitendra Singh told the Business Leaders that India and America have very successful cooperation in Space Science and Exploration and ISRO and NASA are working together to launch a joint radar satellite for Earth observation named NISAR [NASA -ISRO Synthetic Aperture Radar]. The NISAR mission will collect data vital to tackling the climate crisis. The Minister also informed that ISRO has been getting Deep Space Network Antenna support from NASA in its Missions such as Chandrayaan-1, Mars Orbiter Mission (MOM) and Chandrayaan-2 mission and will continue availing support for our Chandrayaan-3 mission. He said, given the space reforms in India in place, India is looking forward to engaging with private sectors for fabrication, manufacturing, and joint development of space system and infrastructure.

On the subject of Geospatial Ecosystem, Dr Jitendra Singh said in the panel discussion that the recent policy reforms provides opportunities to work with academia, industry, and other stakeholders to create a vibrant and dynamical data-driven digital economy. He said, apart from

On the issue of “Earth Science and observations’, Dr Jitendra Singh informed that combined scientific and technical skills and satellite data are being used to enhance observations of the earth and use information [Indian Ocean Variability and Monsoon] most effectively for the benefit of society. The Minister said, realising the importance of Arabian Sea, Scientific Teams from India and the USA have come together to define a collaborative India-USA program called EKAMSAT, where the scientific teams will engage in joint scientific collaboration in the Open waters of the Arabian Sea using research vessels from India and USA for better prediction of Monsoons, cyclone, and severe weather systems.

Dwelling on the aspects of Clean Energy Technologies, Dr Jitendra Singh said, U.S. Department of Energy (DOE) and the Government of India [led by Ministry of Science & Technology] signed an agreement in 2021 to establish the Joint Clean Energy Research and Development Center (JCERDC) to promote clean energy innovation by teams of scientists and engineers from India and the United States in Public- Private consortia modes and identified areas of mutual interest such as – Clean Coal Technologies, Advanced Supercritical Carbon dioxide (SCO2) cycle and Carbon Capture Utilization and Storage (CCUS).

Regarding “Health Sciences & Technologies”, Dr Jitendra Singh said, there has been longstanding collaboration between India and USA in Health Sector. The scientific community and private sector of both the nations have been working together in several programs to understand important diseases and develop new therapeutic, diagnostic and vaccine. He said, new MOU was signed last in October, 2021, which provides an umbrella MOU for expanding cooperation and partnership in the healthcare sector between the two countries.

Indian Minister said, he was happy to note that in the area of Emerging Technologies, DST and NSF (National Science Foundation) of USA launched joint projects recently in wide range of areas of common interests such as – Cobotics, Computer vision, Robotics and Automation Technologies, Artificial Intelligence and Machine Learning, Data Analytics, Sensors, and Networking and Technologies for Internet of Things & Internet of Everything. He informed that bilateral S&T collaboration range from Mega Science such as LIGO [Laser Interferometer Gravitational Observatory], TMT [Thirty Meter telescope], and Neutrino Physics to Clean Energy Technologies, Health Science, Earth and Ocean Science, Agricultural Science and recent interest in expanding our collaboration in Emerging Technologies.

Apart from giving a brief view of India’s Digital Economy, Dr Jitendra Singh concluded by saying that there is huge scope in expanding cooperation in the areas of common priority such as Quantum Technology, Artificial Intelligence, Deep Ocean Exploration, Electric Vehicles, Emerging Technologies for Telecommunications and Semiconductor Research and Innovation, geospatial technology areas related to acquisition, processing, and dissemination of high-resolution geospatial data. We shall look forward to working with you and continue supporting scientific communities of both the nations to create solution for pressing world problems.

Raju Srivastava passes away at age 58

Invivo Air is ready for take-off!

Guidelines on how to Enhance Credit Standing

Raju Srivastava passes away at age 58

#JugJuggJeeyo is coming to cinemas near you on 24th June!!

Hong Kong Sends its Biggest Welcome to the World!