#ArijitSingh: Musical Concert of the Year! 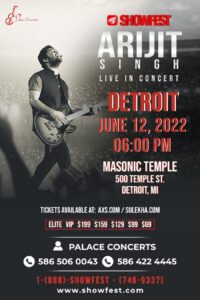 s a very popular Indian singer and music composer. He sings predominantly in Hindi and Bengali, but has also performed in various other Indian languages. He is the recipient of a National Award and several Filmfare Awards. He has given many rich melodies to the Indian cinema and he’s the most streamed singer across every app like Spotify, Saavan, Gaana etc. in India and abroad.
Arijit Singh is the only Indian musician to win over 50 major music awards in the last five years and his versatility has made him the most popular musician in the industry with his concerts selling out around the world.

YOGIS RETURN TO TIMES SQUARE FOR THE 20TH ANNIVERSARY OF SOLSTICE IN TIMES SQUARE: MIND OVER MADNESS YOGA

‘Meditation calms the mind by focusing on breathing,’ – Exclusive Interview

‘Meditation calms the mind by focusing on breathing,’ - Exclusive Interview

#RRRMovie is in the LONGLIST of #BAFTA FILM AWARDS

Canada to provide $10 million funding for #Türkiye and #Syria

Hong Kong Sends its Biggest Welcome to the World!